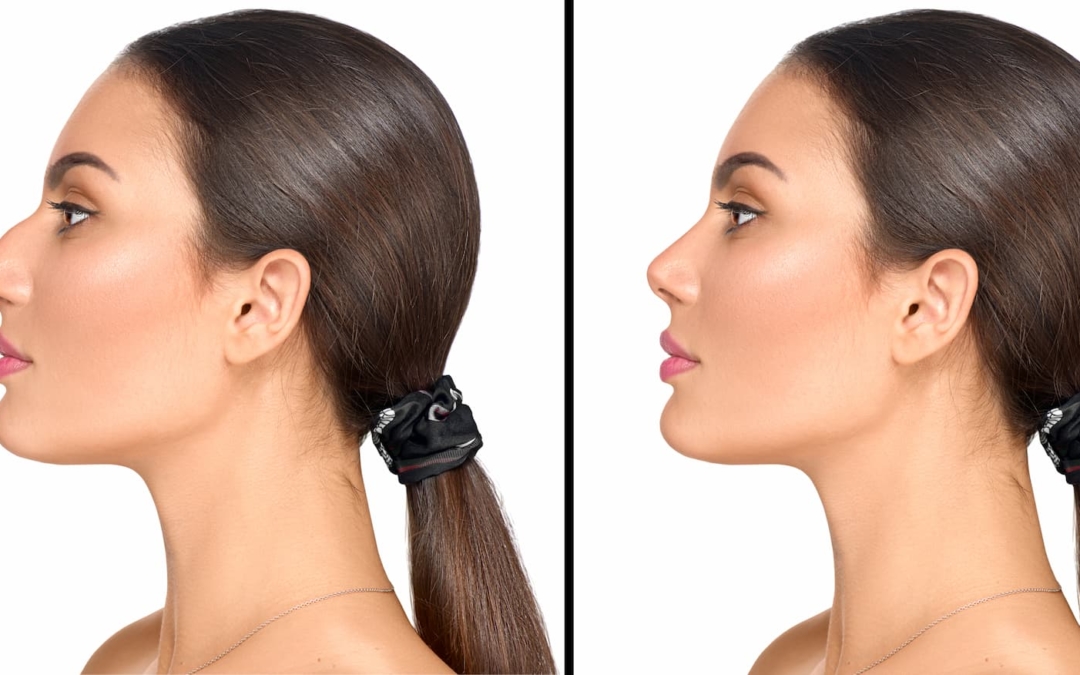 Ethnic rhinoplasty is becoming an increasingly popular cosmetic procedure for people around the world. For patients of Middle Eastern, African American, Hispanic and Asian descent it can provide a way to enhance their facial symmetry and appearance, without diminishing the natural beauty of their ethnicity.

If there’s an aspect of the nose that a patient feels is affecting their appearance it can be resolved with a custom ethnic rhinoplasty. Small adjustments, such as reshaping the nostrils, or reducing or adding volume to the bridge of the nose can bring more harmony and balance to a patient’s facial features. In addition, if a patient has a deviated septum, a surgeon can perform a septoplasty during the procedure to improve breathing, quality of sleep, and overall health.

There are two types of rhinoplasty procedures: closed or open. Closed rhinoplasty is a surgical procedure that is performed by making small incisions inside of the nose which results in no visible scarring. In open rhinoplasty, incisions are made at the base of the cartilage that separates the nostrils. The natural contours of the nose conceal the tiny scar.

What Is Ethnic Rhinoplasty?

“The goal of rhinoplasty should not be to bring attention to the nose or make it obvious that they had a rhinoplasty, instead it should be to refine the nose so other beautiful features of the face like the eyes and lips shine. Patients should still look like themselves, just a more refined version of themselves,” explains Dr. Cat. Understanding these differences will help you start to learn everything you need to know about rhinoplasty.

What To Expect From Ethnic Rhinoplasty 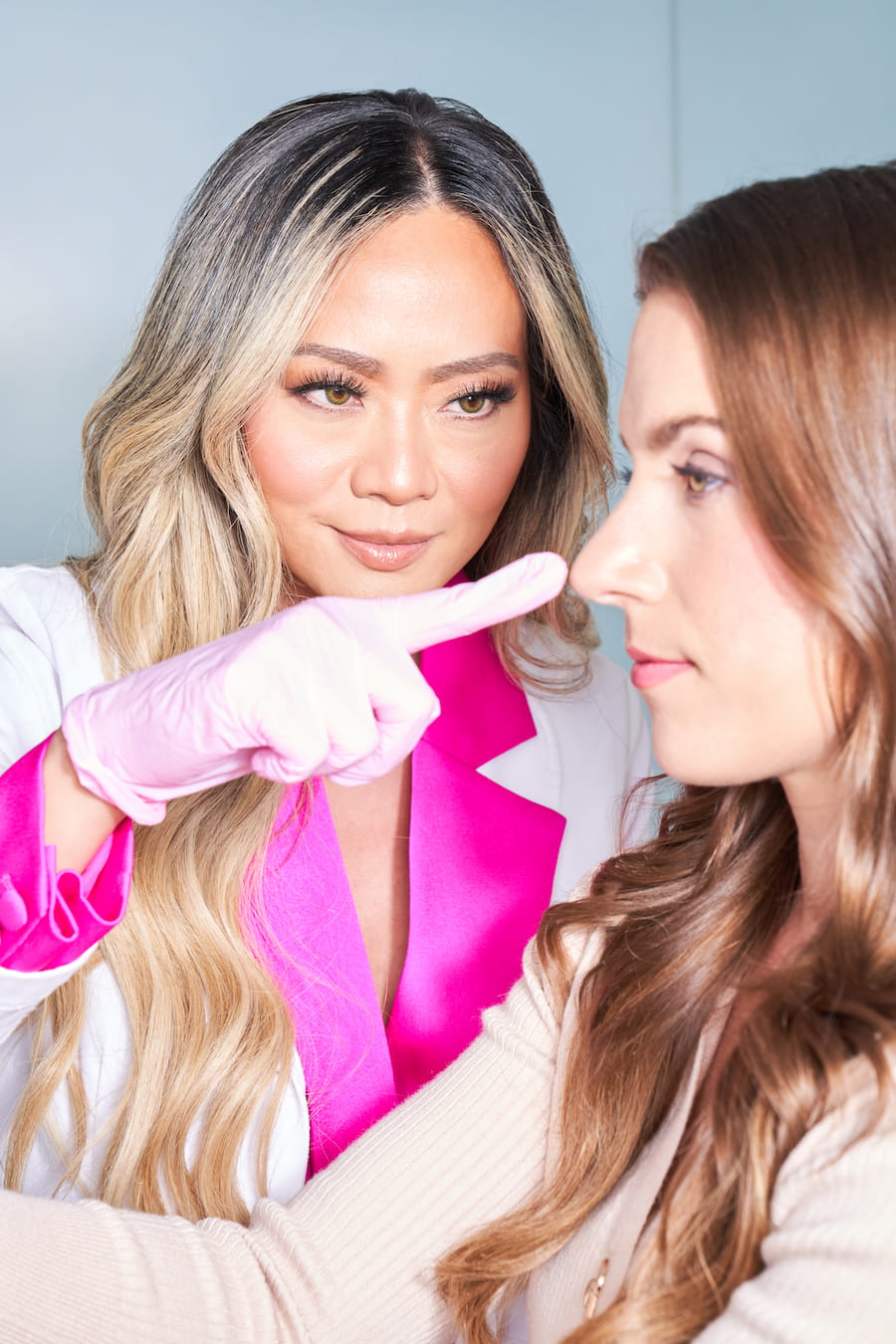 The goal of an ethnic rhinoplasty is always to achieve greater harmony and balance for the nose within the context of the face while maintaining a patient’s unique ethnic traits. Dr. Cat treats each ethnic rhinoplasty with extreme attention to detail. The purpose is to never eliminate the ethnic characteristics, but instead bring greater symmetry and harmony to the face, addressing elements that a patient would like improved. Although every patient is different, there are some techniques often used for ethnic rhinoplasty, which include:

In some instances, other procedures are performed along with the rhinoplasty, such as a chin implant. This can also enhance the balance of and symmetry of the face.

What Does An Ethnic Rhinoplasty Involve?

Dr. Cat Plastic Surgery utilizes computer imagery to show the patient how their nose will be improved and how it will look after the procedure is performed. Depending on each individual’s goals grafts may be used to enhance the appearance of the nose and to make it more elevated and defined.

You can feel comfortable knowing that an ethnic rhinoplasty uses the same surgical process as a traditional rhinoplasty. Your nose’s unique features will be taken into account and Dr. Cat utilizes her meticulous surgical techniques to address the specific needs of your face. Each ethnicity has its own unique nasal features. Dr. Cat will strive to bring harmony to the face while maintaining these ethnic characteristics. The goal is never to remove your ethnic features, but instead to bring more harmony and balance to the face.

To do this, Dr. Cat has spent years studying the unique characteristics of each individual ethnic group. This allows him to address the specific needs of each individual. For instance, he takes into account the specific nasal characteristics of each patient. He also factors in variables such as skin pigmentation, since darker skin tones have the tendency to scar more easily. Dr. Cat has experience and expertise in making precise incisions to reshape the cartilage and skin to ensure the most elegant results. Placement of the incisions is a skill and art that Dr. Cat considers extensively while planning out each procedure. 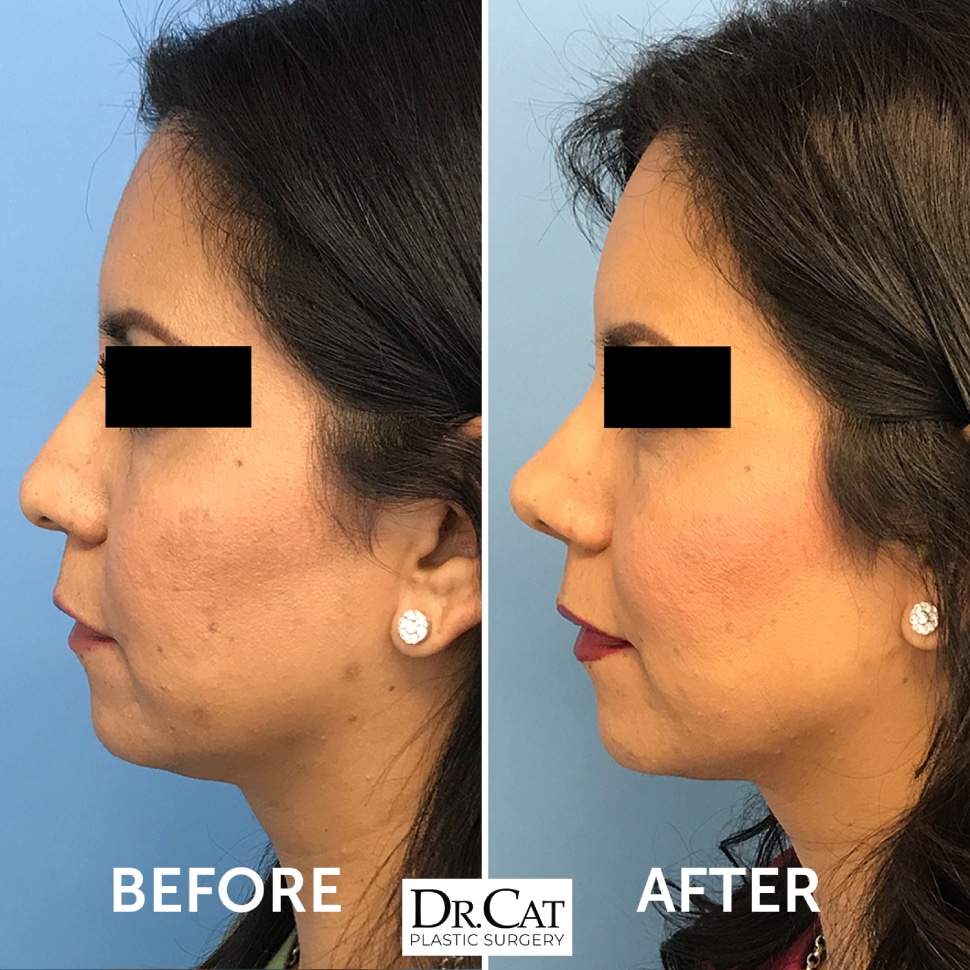 This is a cosmetic procedure performed to reshape the nose for patients who have facial features indigenous to several Asian countries. This procedure enhances the structure of the nose, while retaining its natural balance with the patient’s facial features.

Dr. Cat Plastic Surgery understands that ethnic rhinoplasty isn’t a “one size fits all” process. That’s why she uses advanced techniques to reshape and customize the nose to enhance the overall facial features of men and women who have unique Asian features. The bone structure and anatomy of the noses of people of Asian descent can greatly differ from other ethnicities. The skin around the nostrils may be sebaceous and thicker and the tip may be softer. Rhinoplasty can narrow wide nostrils, enhance a flat bridge, reduce the size of a large or bulbous tip, or correct an asymmetrical nose.

The primary goal with African American Rhinoplasty is to make refinements that appear natural to the nose and preserve the patient’s ethnic facial appearance. Each case is unique depending on the patient. Some of the most common aspects are:

This is a critical part of the rhinoplasty procedure because if it is too weak it could droop over time. To avoid the tip cartilage from weakening after surgery, Dr. Cat utilizes grafts from the patient’s septum. If the cartilage there is too small, the surgeon can harvest additional cartilage from the ear. This is taken from a small incision hidden behind the outer ear. Grafts support the nasal structure, providing the desired shape and supporting the structure of the nose to ensure results last a long time. The best part is, these grafts are from the patient’s own body which decreases any chance of infection.

Tip support is uniform in most African American rhinoplasties. But bridge and width refinements may also be performed. Refinements to the width of the bridge balance improvements to the tip of the nose. Dr. Cat narrows the bridge by reshaping the nasal bones to create a more defined appearance.

In many cases, the tip of the nose has a secondary layer of fat and is thicker. The layer of fat can be removed and the skin is allowed to re-drape over the cartilage which allows the refinements to the nose to become more visible.

The bridge of the nose may appear flat and wide due to a low bridge or widened nasal bones. Dr. Cat can reset the nasal bones into a more narrow position. Another option is to narrow the bridge if it’s somewhat flat in appearance. A lower bridge will create the appearance of a widened bridge.

The main goal of the procedure is to improve the balance of the facial features and retain the patient’s distinct ethnic appearance. It’s crucial to account for the nuances that make each ethnicity unique from other ethnic backgrounds. This will create a more desirable and symmetrical nose that will stay in balance and enhance the rest of the facial features. The procedure will combine small changes that also preserve the ethnic beauty and identity of the patient’s face. 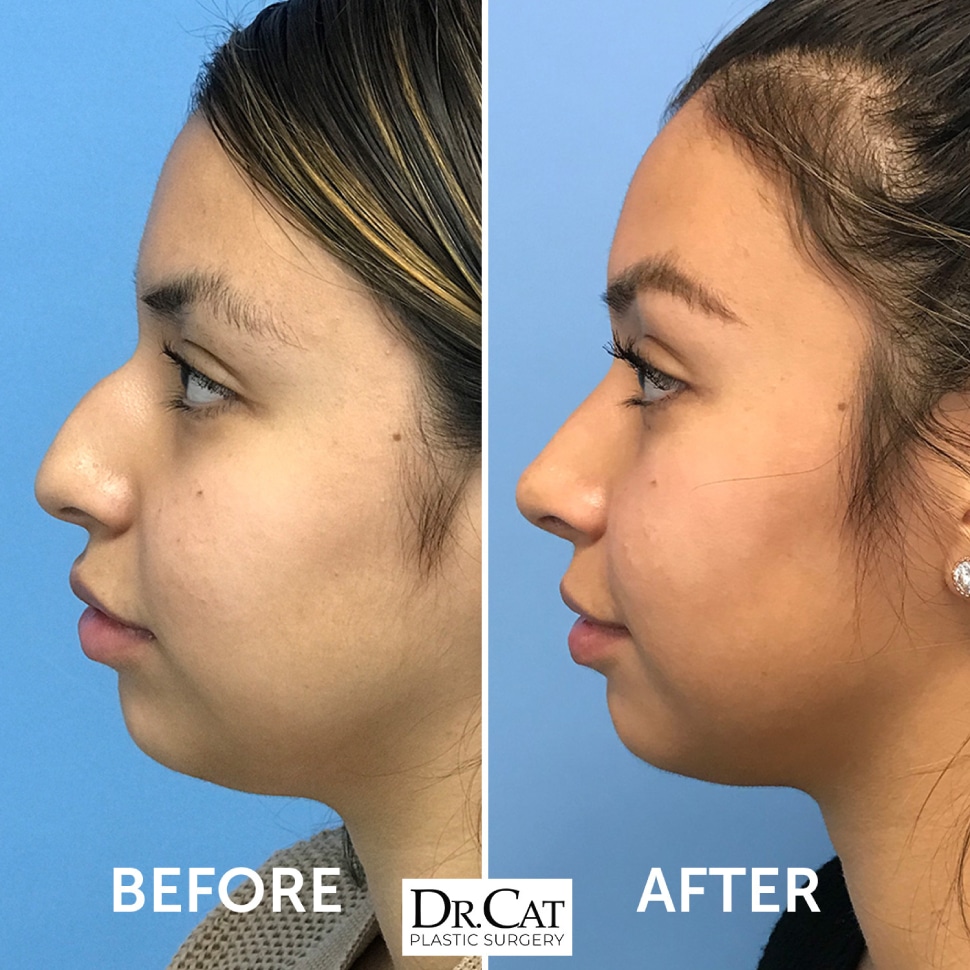 Hispanic or Latino refers to people from Central and South America, Spanish and Portuguese heritage, and the Caribbean. Patients from this group have subtle aspects to their nose appearances like thick skin, nostril flare and position, and nasal structures that differ from other ethnicities. Many people in the Latino community come from all over the world. It’s important to understand the aspects of their unique anatomy and how it varies from other ethnicities as well as those who are in the same category.

Hispanics from different regions have diverse anatomical traits. People from Central and South America differ from those with a primarily Spanish heritage. The unique nose types for Latino rhinoplasty are:

Ethnic Rhinoplasty differs from traditional procedures because it enhances and preserves ethnic features. Mestizo translates to a mixture of races. There’s a blend of indigenous people who inhabited regions of Central and South America. The Spanish, Africans and other European immigrants completed the mixture over time. The Mestizo patient has a combination of Native American and European features with thicker skin on the nose and a wider tip. Dr. Cat can utilize sutures and grafting techniques to reinforce nasal structures and define the patient’s features.

This nose type comes from Caucasian and Spanish origins. The bridge is high and has a common tip projection. Any nasal aesthetics are treated with tip revision and dorsal reduction. A prominent nose can make the chin appear smaller or recessed in profile. Resizing the nose will bring it into proportion with the rest of the patient’s face while preserving ethnic characteristics and overall appearance.

This is a blend of the Castilian and Mestizo noses. Typically the appearance has a common bridge, low root, and a drooping tip. Dr. Cat can alter the tip by grafting the dorsum or radix.

The goal of rhinoplasty should not be to remove the ethnic characteristics of a patient’s face or make it obvious that the patient has had a rhinoplasty. Instead, it should be to refine the nose so other beautiful features of the face like the eyes and lips get the attention they deserve. Patients should still look like themselves, just a more refined version.

Usually, rhinoplasty is an outpatient procedure and typically patients can go home immediately following the treatment. Transportation home by a friend or family member is required since patients should not drive after any surgery.

Rhinoplasty changes and enhances your facial appearance. It’s important to have an extremely skilled and experienced plastic surgeon perform your procedure. This is especially important when it comes to ethnic rhinoplasty due to the challenges it can present.

Dr. Cat is a leader in the field of ethnic rhinoplasty and has helped expand the knowledge and modern techniques related to this kind of surgery. Patients can expect a quick recovery, minimal bruising, little or no discomfort, and thin or nearly invisible incisions. Reach out today for a consultation and chat with Dr. Cat Plastic Surgery staff regarding your rhinoplasty or any other cosmetic surgery you may have questions about. You can give Dr. Cat’s office a call at 310-858-8808 or visit our website for more information.

Cat Eye Lift: How to Get the Look

Lip Fillers Guide: Lip Filler Pricing and Everything You Need to Know

Chin Implant vs Chin Filler: What is better?

What Is The BMI Requirement For Plastic Surgery?