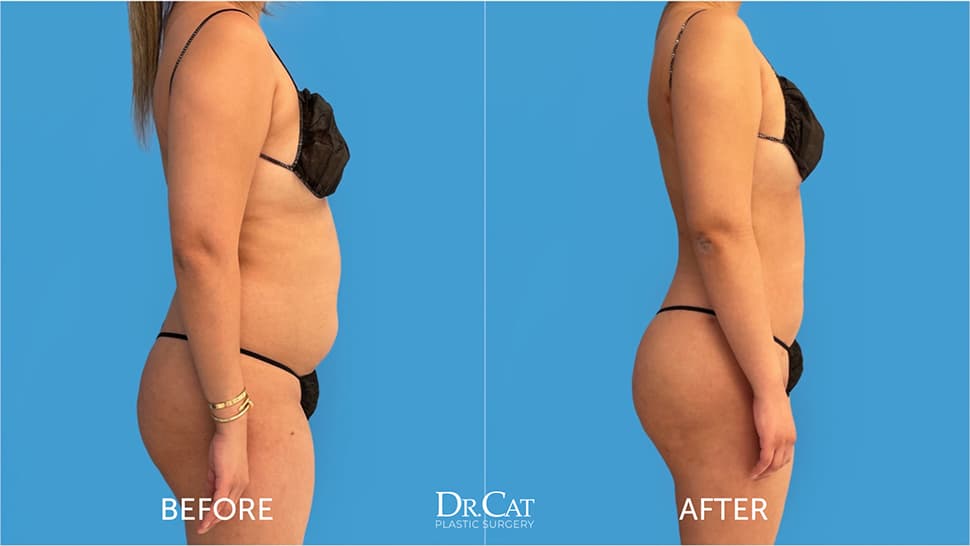 Liposuction is a type of fat-removal procedure used in plastic surgery. Liposuction is not a weight-loss procedure and does not a treatment for obesity. In the United States, liposuction is the most common cosmetic surgery and helps to remove fat from areas of the body that do not respond to diet and exercise. Common areas for liposuction include the abdomen, hips, thighs, neck, arms, back, thighs, knees, calves, and ankles.

How much does liposuction cost? It’s a common question many patients ask when considering the fat-reducing cosmetic surgery procedure. Liposuction, often called lipo for short, sucks away fat cells from areas of the body where fat can be extremely challenging to lose. That includes the hips, thighs, butt, and abdomen. It’s one of the most popular cosmetic procedures since these fat cells are permanently removed from the body. But, before you commit to the surgery, it’s important to understand the cost of liposuction.

What does liposuction cost?

According to the American Society of Plastic Surgeons, the average liposuction cost is $4,000. It’s important to note that this is a national average. Also, other costs have to be factored into the final cost of liposuction. There are additional costs for services such as: 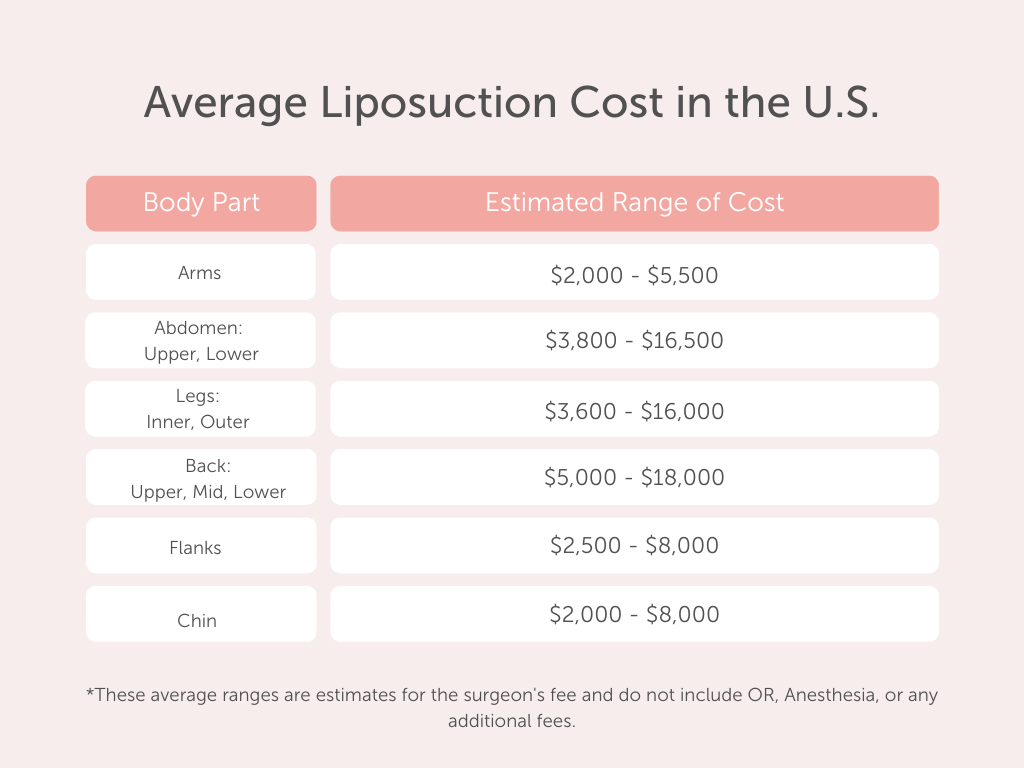 Although this can seem like many different factors, all of these items are typically discussed during your initial consultations. By the end of these meetings, you will have a clean breakdown of these costs so that you can plan appropriately.

What is the cost of liposuction near me?

The cost of liposuction can vary greatly depending on where you choose to have your surgery performed. Larger cities, like New York and Los Angeles for instance, have some of the highest rates for liposuction, which can attract top plastic surgeons to these regions. Areas with a high cost of living will typically carry a higher cost for liposuction. An extremely skilled and experienced cosmetic surgeon will also command a higher rate than a surgeon who is rather new to the profession.

Because cosmetic surgery is a highly refined area of medicine which combines an eye for aesthetics with finely tuned surgical skills, it’s not the best time to bargain hunt. An improperly performed liposuction could lead to excess scarring, tissue damage and the need for further corrective surgery, which could in fact result in far greater costs than an initial investment with a highly-trained surgeon.

What is the average liposuction cost in California? 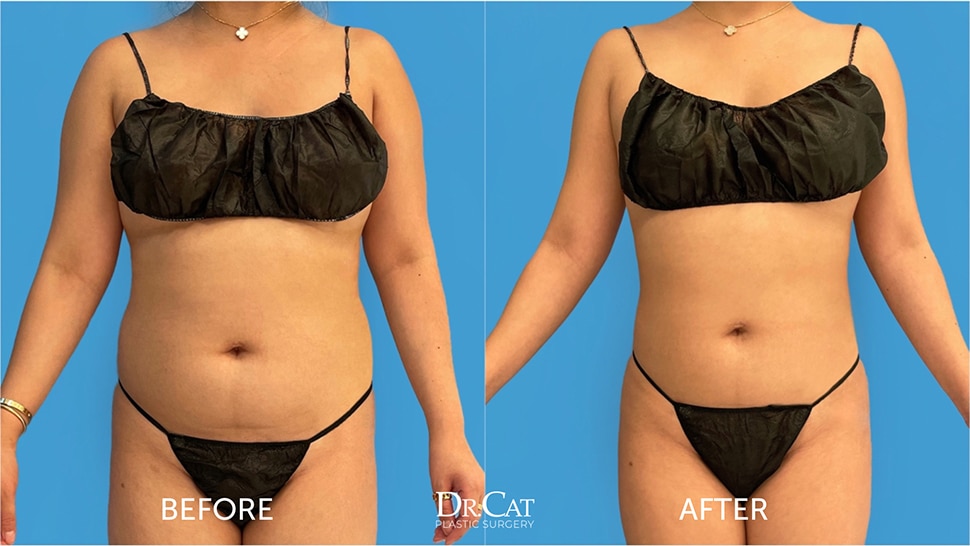 We’ve covered the multiple parts of liposuction which contribute to the cost as well as the reasons why costs may differ based on geography and also factors like the experience and skills of a plastic surgeon. But it’s also important to factor in the degree of liposuction that will be needed and the parts of the body where you would like to have liposuction conducted. These additional factors can change the cost of the procedure. Adding in multiple locations for plastic surgery, like your hips, buttocks and abdomen may make it more efficient to get to your goal figure, but it will also increase the cost. However, it will still probably be more cost-effective to combine locations into one procedure than waiting and doing multiple individual liposuction surgeries. In California, you can expect to pay anywhere from $2,000 to upwards of $40,000 or more for liposuction.

What is the average liposuction cost in Los Angeles?

Again, the liposuction average cost should just be looked at as a ballpark figure to give you an idea of what the cost might be. You won’t know until your consultation where your specific body needs are addressed and costs broken down. This is crucial because although some plastic surgeons may include price lists on their website, how much is liposuction won’t completely be answered until your consultation analyzes your unique body needs and a custom lipo plan is created for you. In Los Angeles, you can expect the cost of liposuction to be similar to the average cost in California, although it may be slightly higher, with the cost of lipo exceeding the high end of $40,000.

What should I know about the liposuction cost in Beverly Hills? 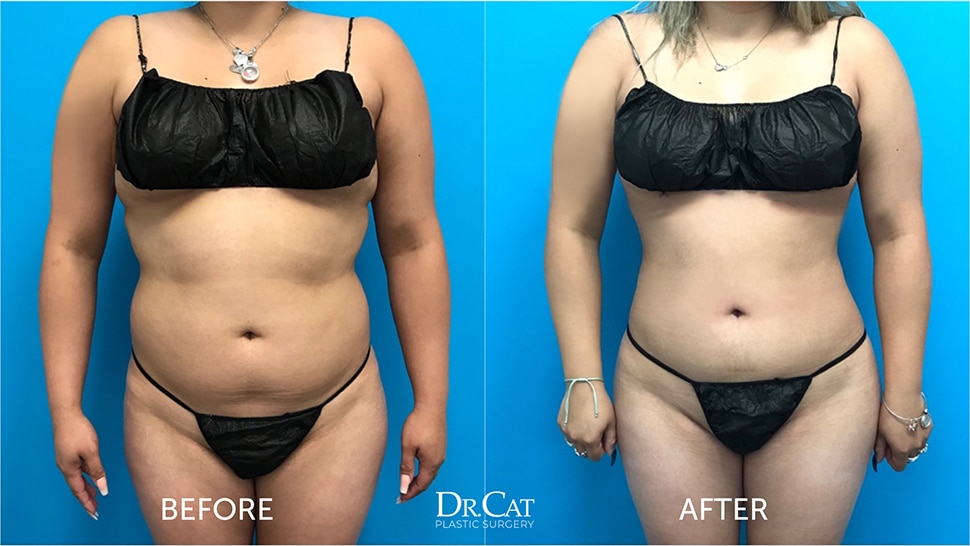 Beverly Hills is one of the most competitive locations for plastic surgery. With so many celebrities and people who make their careers in the entertainment industry, the criteria for being a successful cosmetic surgeon are quite high as is the demand for these types of procedures.  For liposuction in Beverly Hills, you can expect costs similar to all of Los Angeles, although it is not unheard of for prices to be higher in this specific area, due to demand and the skill level of cosmetic surgeons in this area.

Dr. Cat specializes in liposuction surgery in Beverly Hills and Los Angeles and is a three-time winner of the Best of Beverly Hills Award in the cosmetic surgeons category. Dr. Cat is renowned for her work in Revision Liposuction, which is the procedure to fix liposuction errors. She believes in taking the time to finely tune every movement that is made in the liposuction procedure. She sees patients who have received over-aggressive liposuction procedures which result in bumps, irregularities and injuries which are sadly many times irreversible. It’s Dr. Cat’s meticulous eye and attention to detail that has created such a loyal following of celebrities and Beverly Hills’ residents.

Is liposuction cost covered by insurance?

In most instances, liposuction is not covered by insurance because it is considered a cosmetic procedure, which is not medically necessary. There may be some rare instances where liposuction may be covered by insurance. In these scenarios, the doctor and patient need to provide proof of a therapeutic benefit to the body, such as how surgical breast reduction can alleviate chronic back pain. Liposuction may also be an option for breast reduction as well as subcutaneous lipomas, where lipo can help in the removal of small fatty tumors. 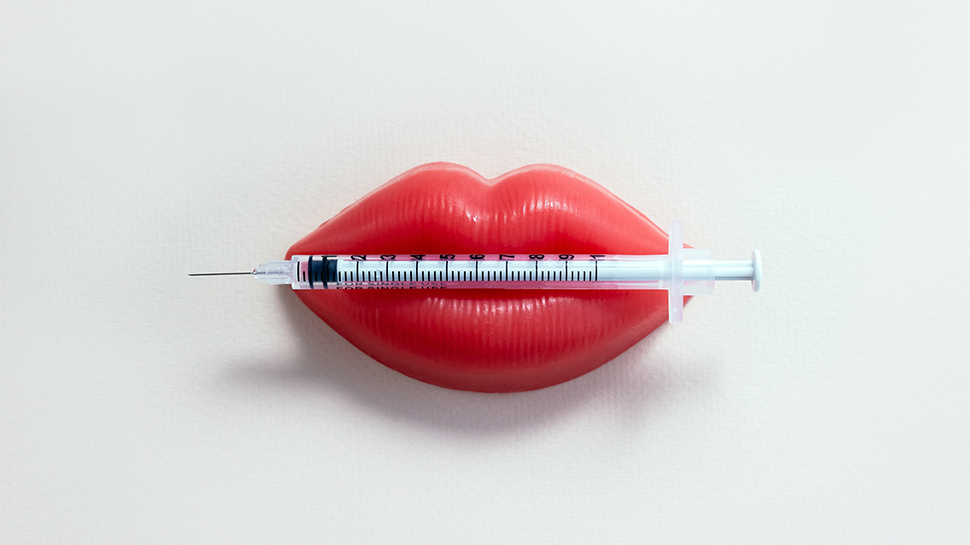 Lip Fillers Guide: Lip Filler Pricing and Everything You Need to Know Brotox Is Trending: Why Men are Getting More Plastic Surgery